I’m embarassed to admit that until recently I had never heard of the Bechdel Test. To the uninitiated, it’s a test that measures movies based on whether they have two named women in it who a. talk to each other and b. talk about something other than a man. I first heard about this test at the Star Trek Las Vegas convention when a woman in the audience asked a question about it. Forgive me, but I can’t remember the exact phrasing of her question, but it had something to do with whether we thought Star Trek would pass the Bechdel Test? First of all, I love being on a geek girls panel at a science fiction convention for this very reason. It’s a humbling experience because I learn from the audience as much as they learn from us. I am often introduced to new ideas because the fan base is so invested and well-read. I was caught off-guard by the question because I was not familiar with the term. Once she defined it, I thought The Original Series would fail for sure. Next Generation might even fail depending on the episode. Sure, there are quite a few female characters on Next Gen, but how often do they really interact with each other alone? Star Trek (2009) passed the test, but the test itself doesn’t determine whether it’s feminist-friendly.

I seem to recall one of the main female interactions taking place with both Uhura and the Orion in their underwear, which quickly devolves into a conversation about where Kirk is hiding. I feel it shouldn’t have passed, but that’s open to debate. The main reason for it passing is probably because the conversation prior to revealing Kirk definitely delivers some key information that drives the plot.

I immediately thought Star Trek Voyager would pass with flying colors. Female captain? Check. Female chief engineer? Check. Female scientist? Check. Mothers and daughters on the ship? Yep, got them too!  It’s interesting, for as much crap as Voyager gets for being conceived through the eyes of male fantasy, it has many instances of women talking shop, questioning their humanity and occasionally, discussing a strongly brewed cup of Joe. Of course, no one can deny Voyager’s epic bro-mance between Tom Paris and Harry Kim, but that’s another topic for another day.

Granted, this test is usually used to measure female interaction within films, but each episode of Star Trek plays like a mini movie. It seems more than fair to try to apply the test. You’d be hard-pressed to find an episode where Torres and Janeway don’t talk tech. It seems to be a regular plot point on Voyager that there’s some problem with the warp core going offline and B’elanna needs to fix it. Similarly, when Seven of Nine is introduced we see her schooling the captain in the astrometrics lab quite often. Plus, who could forget Seven’s feisty introduction to Torres?

We also learn about Torres’ mother, Miral in “Barge of the Dead,” where she appears to her in spirit form. Many interactions of female characters on Voyager happen in non-traditional ways like Miral’s soul talking to B’elanna. We also encounter characters talking to another version of themself. It all counts towards the Bechdel Test because remember we’re looking for two named female characters talking about something other than romantic relationships.

One of the things I love most about Voyager is Janeway’s compassion for her crew. Her maternal qualities open the door for many mother/daughter type interactions. We get many memorable scenes with her mentoring Seven. She encourages her to recall pre-Borg life. Speaking of Seven, we get some really entertaining scenes between her and Naomi Wildman, the young daughter of Samantha Wildman. They often had lunch, played kadis-kot and learned from each other. Naomi’s curiosity about the Borg made for some very amusing female interactions. 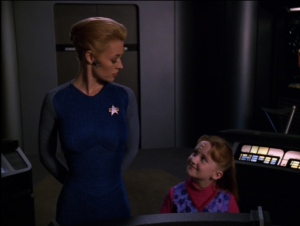 Then there’s Kes, a character who would not finish her run on the show, but definitely left some Bechdel Test-approving scenes. I seem to recall Janeway comforting her and giving her advice on many occasions. Kes’ exit in “The Gift” is one of the most-heartbreaking moments. We see Janeway’s vunerability as she embraces Kes, on the verge of tears telling her how much she will be missed. 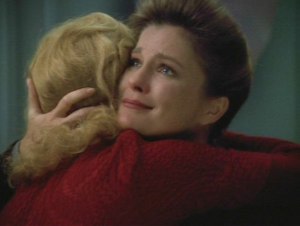 So, Voyager may not be everyone’s cup of tea, but it does meet the requirements for the Bechdel Test in a multitude of episodes. With any ensemble show that’s been on seven seasons you’re bound to have a male-driven plot line here and there, but overall you have a lot of dynamic female characters that talk to each other about a variety of topics. Now that I’m aware of what the Bechdel Test is, I can’t stop noticing whether or not movies or TV shows I watch pass. I’m constantly amazed that in 2012 they don’t all pass.

For more information on what movies pass or fail the Bechdel Test check out, http://bechdeltest.com/ or Feminist Frequency’s videos.